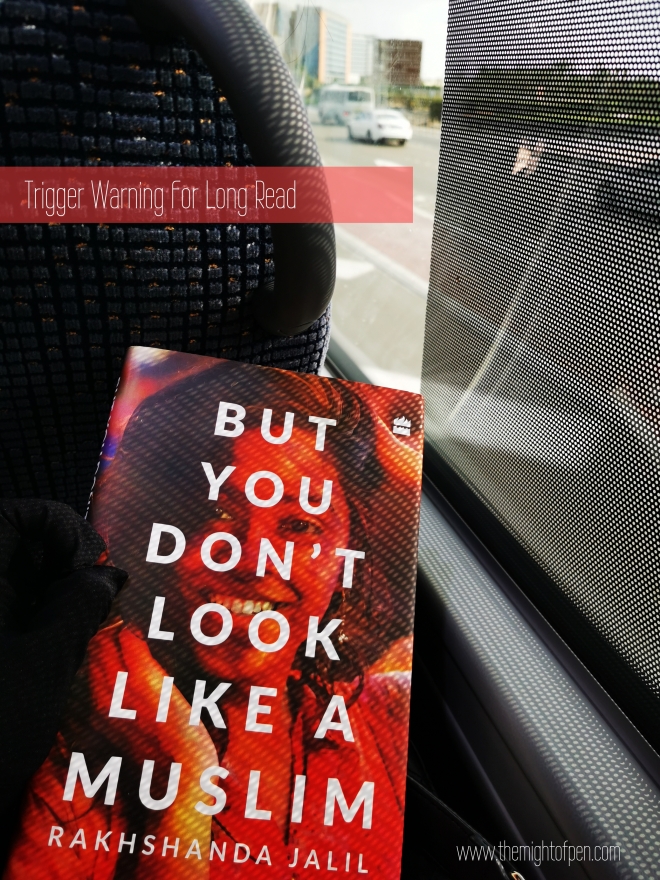 ‘Hey, but you look like a muslim’: Identity crisis for practicing muslims

As if she wanted to say something, or ask, or perhaps wanted to simply burst into laughter saying, ‘Hey, But You Look Like a Muslim’.

This shot came into my lens around the time when Covid-19 had already made rounds in the town; however, the travel restrictions were still not there. January 27, 2020; to be precise.

I caught the bus from the terminal, took a comfortable seat, munched on the bar I was having, finished the pending lesson from the Qur’an. By the time everybody around had settled too. Most of them listening or watching something on their phones, with earphones plugged in. A few whispering (though still audible) into the mouthpieces of hanging wires and rest of them sleeping. There could not be a better time to start reading, uninterrupted for the next one hour on the running wheels.

I brought the book out of my bag. Brand new, crisp in pages, fresh in smell; the copy I had recently received.
‘But You Don’t Look Like a Muslim’, the title of the book said.

My glance kept adoring the beautiful cover for a while

. I clicked the pic, opened the first page, and peeped out of the window at my right before finally reclining in the seat to sink into the book. As my head came back from the right my eyes passingly caught the stealing glances at the left. I looked there. The lady at the left was staring at me and at the book cover that said, ‘But You Don’t Look Like a Muslim’.

As if she wanted to say something, or ask, or perhaps wanted to simply burst into laughter saying, ‘Hey, But You Look Like a Muslim’.

I smiled at her. She might have not noticed as my face was fully covered in the black niqab (veil) except from the eyes. But she must have noticed. I see babies warmly smiling back at me and sometimes even giggling when I smile at them and say Hi from behind the same piece of cloth I wear whenever in public sphere. Well, babies are different.

Anyways, I came back to my book.
‘Oh, But You Don’t Look Like a Muslim’ is the book written by Rakshanda Jalil, an Indian literary historian and cultural commentator. She talks about the stereotyping of Muslims in India, associating them with a certain set of characteristics, portraying them in a bad light, and about many more things.

“The outward purdah is bad enough; what worse is the purdah of minds,” the book said.

“The truth perhaps is that religious zealots adopt these intractable positions not because they have substantial proof for their belief- either in Holy Qur’an or in the Sharia-but simply because they fear that those who ask for debate will challenge their hegemony,” the book said.

As I was flipping the pages of the book, I had so much to say. Like I had from always.

I have a lot to say. Nevertheless, not now. If God willing, at the right time, some other day.

The only reason that brought the book to surface today in my mind was that Khatija Rahman, AR Rahman’s daughter, has made her big entry into the music scene with her latest release ‘Farishton’. And, as her name started making rounds in headlines and status messages, the topic of her ‘purdah’ came up again.

I also remember the remarks made on her not long ago by the writer Taslima who criticised her for how “even educated women in a cultural family can get brainwashed very easily.” Read it here.

Though Khatija’s savage reply silenced her critics at once. The double standards and the hypocrisy in our society remained the same. And, to be honest, I really do not have much hopes from this society. It will perhaps continue to function exactly like how it is in present.

I really wonder sometimes; at one hand the anti-purdah squad raise slogans in the name of ‘freedom of choice’ but on the other hand cannot accept the same freedom of choice for those who go for it.

I wonder why the folks who talk most on how bad stereotyping could be when ‘they do not want to look like a certain way’ cannot themselves stop stereotyping an ‘educated’, ‘confident’ ‘open-minded’ Muslim woman in the mould that fits them.

I wonder why a woman instantly becomes open-minded the day she shuns off her niqab-jilbab-hijaab. Otherwise she has a purdah on her mind.

A woman suddenly becomes educated, competent, talented, and what not the day she starts wearing what they suppose an educated woman should be wearing.

A woman with excellent degree, commendable credentials, unique talents, impressive skills who till yesterday was wearing the same as they were wearing had everything to be looked up to; but, the same woman became ‘backward-brainwashed-incompetent-homemaker’ the day she chose to dress differently.

A woman who changes her wardrobe every six months as per the changing trend is just ‘up to the date’. While the woman who makes her choice as per the divine commandments is ‘brain washed’.

I really wonder who is brain washed and who is not; brainwashed by the ‘society-fashion-whims-desire-trends’ or by the religious text that a few claim ‘doesn’t even exist’. (By Allaah! I wonder when such claims come from those who are supposed to lean heavily on research and reference by their professions and positions. Anyways.)

Yes. It is freedom of choice.
To say, ‘yes, I do not want to look like a Muslim’ is a different thing and definitely one’s own choice. However, to say ‘those who look like a Muslim’ brain-washed, stupid folks with ‘purdah-on-minds’ is an evidence in itself ‘who stereotypes’ and ‘who judges’. How open-minded and civil of one who cannot think about others beyond their own prejudices!

For the matter of outward tokens of religiosity- the purdah in woman & the beard in man- I wonder why a Muslim is suddenly presumed impure in heart when his/her religiosity starts reflecting outside- as they say it is Inward that matters. While for all those who condemn the ‘outward’ get the free tokens of an impeccable pure heart.

And, you dare put your opinion or explain them when they mock you, ask you, turn a cold shoulder on you…“You, judgmental religious fanatics” is what you get.

Now is the time when one really needs to have a spine of steel to look like one’s religion and to live life without trespassing the boundaries set by the religion. So, say anything for us but not ‘brainwashed’, ‘feeble’, ‘parochial’ or ‘in-competent’ at least.

Do not lament
Do not sigh.

You are as free as anybody else;
free to choose even if you choose to abide.

In a society where values are reversed
the weak is strong
the strong is weak
you do not lament
you do not sigh.

Remember, it takes nothing to join the crowd but everything to stand alone. It is you who is strong, not them. It is you who is confident, not those who can’t even step out their homes if they do not fit in the standards set by the ‘times’.

“Just go for it”
If you want to look like a Muslim
Feet Firm
Head High.

Hey, but remember…
It is the ‘Inward’ that matters a lot
So, do not say
‘But you don’t look like a Muslim’
If you see someone looking otherwise…

For Allaah knows what might be inside them
And, it eventually comes outside.