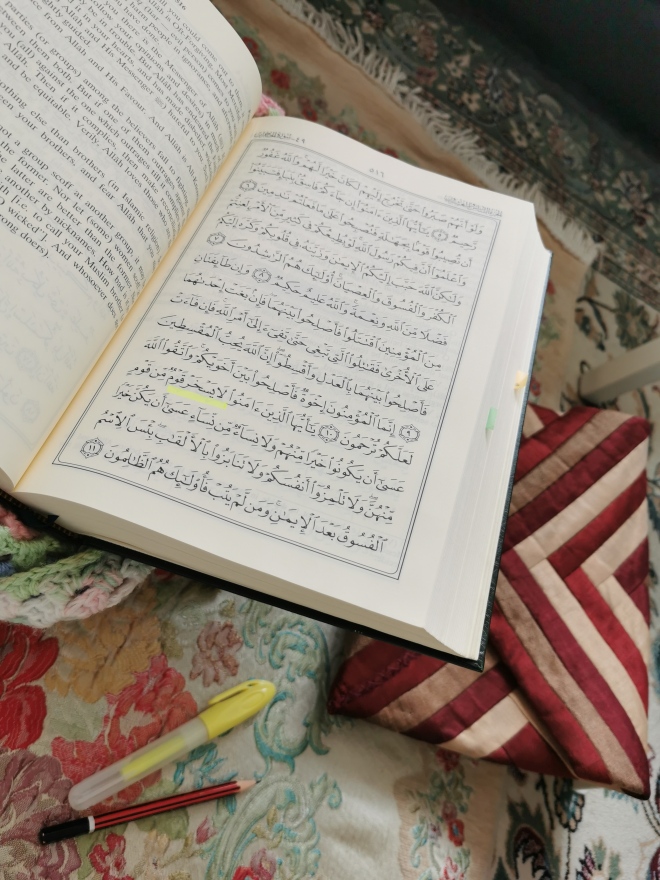 ‘La Yaskhar’: A beautiful lesson from surah al-Hujurat from the Qur’an

Pearls From Qur'an by themightofpen9th Dec 2020

The Mushaf infront of you lay open at surah al-Hujurat in the Holy Qur’an.
The highlighted part of the verse says, “Laa Yaskhar”
‘Do Not Scoff’, the words mean.

Do you know what actually ‘to scoff’ mean?

And, you know what…
Sometimes we do not even have to say anything to scoff. In fact, most of the times we guard our best to not utter anything derisive from mouth while scoffing. So that if confronted, we could say, “But what did I even say, nothing?”

But what makes us do this, to scoff?
Simple. Because we consider ourselves better than others.

And, true! It might be true in that particular scenario.

HOWEVER!We might be lesser, and much lesser, than the same person in hundred other things. Things that not necessarily might be in picture at that moment of time.

The aunty who was laughing at the new mother for how the poor lady was handling her baby, might be terrible with many other things. And the Mom struggling with her baby might be actually better than her in matters that matter even more.

You don’t second that, what I say?

Look how beautifully the Qur’an, the Book of Allaah Subhanahu Ta’ala, sheds lights on this human psyche.

By, Allaah!
So True.
How easily we mock others for a trait or two without even realising that they might be better than us in eyes of Allaah for something good we might not aware of.

One day, companion of the Prophet Muhammad (may Allah bless him and grant him peace) Abdullah ibn Mas’ud (may Allaah be pleased with him) ran to climb a tree to pick the Prophet’s ﷺ miswak. That day, as he climbed a tree, his lower garment rose a bit more than usual and exposed his lower legs. Some Companions who were there laughed at the sight of such skinny legs.
The Messenger of Allaah, (may Allah bless him and grant him peace) said, ‘Why are you laughing?’
“Abdullah’s foot is heavier in the balance than the mountain of Uhud.'”

And, the root cause of this scoffing is pride. The arrogance.
And, what do we think what arrogance is?

Arrogance is refusing the truth and belittling people.

How apt somebody said, “the vices we scoff at in others laugh at us within ourselves.”

Let’s get rid of the pride within us. Let’s learn how to do that.
And, never scoff at others.