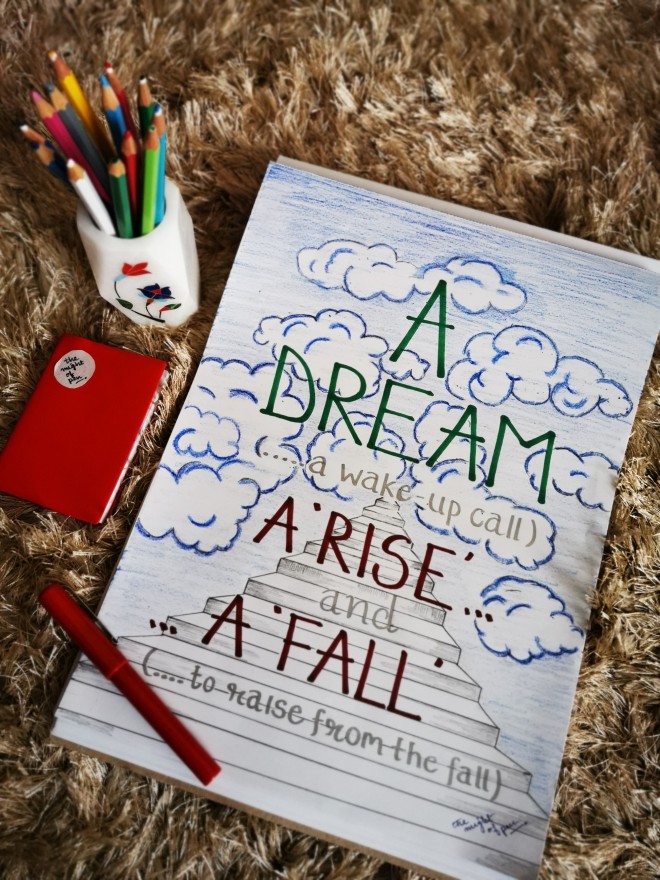 Wake-Up Call: A Dream That Woke Me Up

Sometimes it takes a good fall to really know where you stand.

Dear Diary
I ran towards it as fast as I could. This was the most beautiful staircase I ever saw. The unparallel whitest marble of the staircase was looking even more white with rain falling over it from the skies. Stemming out from the ground, it was reaching to the heavens above, in many curls.

It all started just in a flash, all at once, staircase, rain, clouds, heaven, takbeer, those two men running like anything, and me following them. I dashed towards them upstairs to race, but they scaled far higher than me in no time.

“I should run first”, I was just saying this to myself that suddenly I heard a lady calling me from behind.

“Check out…See how nice this is.”
A lady on the ground called me by my name, with a smartphone in her hand, showing me something on its screen.

“Rasgulla?”
I quickly leaned back to get a closer view.

“Oh. No.”
Suddenly I realized what I had done…
Bewildered, I tried to rush again. However, it was all gone. The moment I stopped for that bait; the whole staircase disappeared.

No clouds. No rain.
I was not able to hear any takbeer.
Gates to heaven were closed.
The whole staircase reaching to sky disappeared in front of my eyes.

It was all gone in a flash. And, I was left stranded on the ground wailing in disappointment, mad at the lady who distracted me with the smartphone. To add to my disappointment, the image that appeared ‘rasgullas’ to me was just ‘boiled eggs’.

I was crying profusely. Then, suddenly…

Suddenly, I woke up from sleep just to realise that it was a dream. The staircase and the whole story of ‘the rise & the fall’ was a dream I saw that night.

However, it was a nightmare. In the darkness of night, I was fully awake fearing the worst. I had applied to Hajj that year and there were only a few days left to embark on the journey. Even the luggage was packed. However, I had a very strong intuition that I won’t be able to make for Hajj.

The nightmare came true. Just a day before our flight we got to know that Saudi govt. had rejected our visas for some reason. And, I cried the same way as I cried in the dream.

Once my eyes were dry of any more tears, I started reflecting. Half of the obvious part of the dream had already been decoded. I started thinking of the remaining.

The smartphone was simply the smartphone. The very device that has consumed us all, the individuals, the families, the youth, the nations…

The sweet ‘rasgulla’ was the enticement, the activities on our devices that appear so sweet, innocuous and tempting, hard to resist all the time…

Heaven above was the ‘destination’…

Call from the lady on the ground was the ‘distraction’.
The two men ahead of me were ‘those determined on right path’…

The staircase was the key to ‘heaven’…

The disappearance of the staircase was the closing of the gates of success & heaven, when you get distracted, and get consumed in the ‘laghw’…

And, the whole episode of failure to reach for Hajj was a message that if you continue to waste time in the enticements of lowly nature you won’t be able to reach your ultimate destination, even if you are all set to go.

SubhanAllaah ❤️!
I realised that how much Allaah SWT loves His slaves.
I was already struggling those days to be a better person. I was never a person in my life just sitting and doing absolutely nothing. However, just like everybody else, my phone had affected me much if not quite a lot. Though I was never talking or chitchatting for long, I was not realising that I was wasting hours and hours simply checking video after video on YouTube. Without even realising, I was late to bed and late to rise, just because I was checking message after message on WhatsApp, sometimes without even truly enjoying them. I had no idea that so much of my precious time is eaten up by the gallery in my smartphone. At the end of the day, there was hardly anything from that was truly benefitting me. Those all were ‘boiled eggs’ that appeared ‘rasgullas’.

SubhanAllaah ❤️!
As I woke up from that dream, Allaah SWT opened my eyes too.

I realised that there are only two options; rise and fall. Either run upward in the direction of success on the right path, crystal clear whitewashed with serene rain, towards heaven or stay behind distracted engrossed in useless trivial matters just to fail and cry in remorse at last.

Be it the life of this world or the hereafter, you can’t scale the heights without a disciplined life and a goal. The moment you turn back the doors are closed.

Alhamdulillah ❤️!
Allaah SWT helped me to discipline myself better.
I took the reins in my hold to not get distracted again.
The one hour that used to pass in no time became sixty individual minutes and each minute started passing at its pace. My life became better than ever.

Alhamdullillaah ❤️!
Allaah opened the doors again.
I was able to go to Hajj the subsequent year.

And, I felt as if Allaah made me fall temporarily to raise me from the ultimate fall.
He woke me up from sleep with this dream.

Thanks, Allaah, for this abrupt Wake-up call.
And, thanks for making me write this message for all.